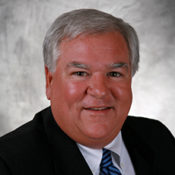 Larry is a qualifying life member of the life insurance industry`s Million Dollar Round Table from 1976 to present, having achieved Top of the Table status. He has many years of experience in working with public and closely held corporations, family businesses, franchises, partnerships, and professionals in designing and implementing executive fringe benefits, group insurance, retirement programs, and business succession plans. Larry has been President of The Indiana State Association of Life Underwriters, President of The Louisville Chapter of CLU`s and ChFC`s, and President of The Louisville Estate Planning Forum.

In 1991, the Southern Indiana Chamber of Commerce named Larry their “Professional Person of the Year.” Larry was also named “Hoosier Life Underwriter of the Year” in 1992 by the Indiana State Association of Life Underwriters.” This designation is the highest honor given to an insurance agent in the state of Indiana. Larry’s firm, Ricke and Associates, also received the Inc.redible award given by Greater Louisville, INC Chamber of Commerce, as the outstanding small business in the metro Louisville, KY area in 2004. Larry works in New Albany, Indiana.