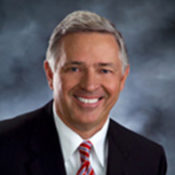 Larry Foster was born and raised in Decatur, Illinois and entered the life insurance business right out of college with Connecticut Mutual Life.

Larry is President of Foster Financial Services, Inc. a company he founded in 1977.  The firm specializes in insurance, investments and financial planning services.

Larry earned a Bachelor of Science in Marketing and Finance from Millikin University in Decatur.  He completed his Master of Science with a Financial Services degree from the American College in Bryn Mawr, Pennsylvania.

Larry earned his Chartered Financial Consultant (ChFC) designation in 1982, Chartered Life Underwriter (CLU) designation in 1973, and accredited estate planning (AEP) designation in 2003.  He is a life member of the Million Dollar Round Table, was a Blue Chip Council Member with Massachusetts Mutual Life Insurance Company (MassMutual) from 2002-2014 and an Exceptional Level of In-Force (ELIF) in 2008.

Larry opened another office and lived nine years in San Diego, California but returned to his beloved Decatur in 1993.  While in California he returned to Decatur 75 times to meet with his friends and clients.

In 2008, he received the prestigious William Booth Award for his substantial contributions to the work of the Salvation Army and he was chairman of the successful $5 million fund drive.

He and his wife Debbie are blessed to have 5 children and 13 grandchildren.  They enjoy traveling, community service, and spending time with family.